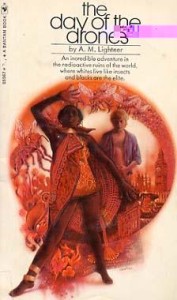 I’ve been unable to find much information on Alice Lightner. She wrote a number of young adult science fiction novels in the 60’s, but The Day of the Drones seems to be the only one she authored for an adult audience. She also wrote many books on nature for children. I’ve found one source which claims she was a Black American. I have yet to find a picture of her. I’m guessing she was a very private person, such as Margaret St. Clair, and left very little in the way of interviews, etc. She passed on in the late 1980’s. I do know she lived not 30 miles from where I now write. Would be interesting to know if the Bucks County, PA library has much information about her.

Day of the Drones is unique in most science fiction novels written before 1980 in that it assumes an African civilization would be the one which survives a nuclear war. Robert Heinlein touched on this issue and I can’t help but wonder if Drones was a  response. In this novel, the African civilization survives because it was isolated from the rest of the world. She never tells you exactly where the in Africa the survival took place, but the assumption is sub-Sahara.

The book is told from the viewpoint of Amhara, an educated young woman who is growing up in this post-holocaust world 500 years into the future. Early on, she’s shocked to learn that her brilliant cousin N’Gobi has been sent to work in the outer woods as a  forester because he’s too light in complexion. The world she lives in regards anything lightly colored taboo and even bans machinery. It’s ruled by The wasan, or king, and a senate of elders from the various African clans. She eventually ends up attending college and mastering ancient languages. This allows her the opportunity to examine pre-disaster books and loan them to N’Gobi.

All of this becomes very useful when N’Gobi brings Amhara a duck he’s captured with an unusual knot tied around it’s leg. The knot is foreign to any of the clans in the kingdom and is made from a material unknown to the kingdom. Amhara is able to get the “Dons” (professors) at her college interested and arranges an audience with the wasan himself.

There’s a painful scene where the Wasan meets her cousin and is shocked to discover someone so white is still breathing air. At one time, children too pale in complexion where left exposed. However, he has a change of mind and authorizes an expedition to the northern lands, across the desert, to find out if anything has survived. The wasan even authorizes the use of a hidden solar-powered helicopter for the trip. And N’Gobi is given the job of learning how to pilot the chopper.

The second part of the book involves the expedition north. The helicopter eventual lands in England and they make contact with a British civilization which has survived the nuclear Armageddon. Amhara is able to communicate with the first man they meet since she’s an expert in ancient languages. What they find are insects grown to very big sizes and a primitive matriarchal society based on a bee hive. This theme would be explored later by Frank Herbert in Hellstrom’s Hive.

The Day of the Drones is a great book from the 60’s sf epoch. All sorts of new ideas were being explored. The book must have been popular enough as my copy is the 3rd printing. I have no idea why the author didn’t write anything else for adults.