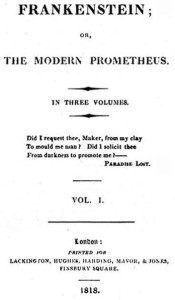 “#12 ‘Frankenstein’. A tale of a modern Prometheus. If the countless film adaptations of this have kept you from reading the novel, that’s your mistake.”
-Karl Edward Wagner, “The Thirteen Best Science Fiction Horror Novels” (Twilight Zone Magazine 1983)

Frankenstein is one of those books everyone knows about, but few people read. Which is too bad because it holds-up despite it’s age. After enduring Melmoth, I dreaded reading anything published before 1850. I’d read Frankenstein 40 years ago, but couldn’t remember much about it. At 175 pages, it can be read quickly enough. Although filled with reams of descriptive dialogue, the central themes of the novel hold up.

The novel begins with an artic expedition. In a letter Captain Robert Walton, who is trying to find a passage to the north pole, details how he ran across a lone man traveling across the ice. Lured on board the explorer’s ship, the traveller turns out to be one Victor Frankenstein who is in pursuit of the monster he created. Stories within stories detail the creation of the monster, how it felt abandoned by it’s creator, and why it vowed revenge aginst Frankenstein.

Of course, you can’t talk about the book without talking about the movie versions. The best is the one starring Karloff, directed by James Whale in 1931. Bride of Frankenstein adds some of the details in the novel omitted by the first movie. Frankenstein: The True Story (1973) was a good attempt at trying to do the monster right, but has little relations to the novel. Strange how the name “Frankenstein” has come to designate the monster, which is never given a name in the book.

Mary Shelly, who was only 18 at the time, managed to write the book after vacationing with her soon-to-be-husband Percy Bysshe Shelley at Lord Byron’s place on Lake Geneva IN 1816. Byron suggested everyone at HIS villa write a ghost story one evening. Frankenstein was begun by Mary. Byron never managed to finish the story he started, but John Polidori, a doctor visiting at the time, created Lord Ruthevan in the novel The Vampyre. The entire soiree has been dramatized numerous times, most memorably as the movie Gothic, directed by Ken Russel.

Frankenstein is a quick, but thoughtful, read. I can see why Wagner included it on his list.