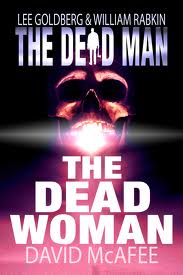 The Dead Woman, #5 in The Dead Man series, continues the travels of Matt Cahill, resurrected drifter, in his attempt to find out the truth behind Mr. Dark, his nemesis. In this book, by veteran horror historical writer David McAfee, Matt finds himself in the deep south. He stops at a small town called Crawford in Tennessee.

As the author describes Crawford:

“…Several signs hung out on the sidewalk proclaiming local businesses; a tax specialist here, a law office there, even a tanning salon advertising its location with a picturesque scene showing a bright yellow sun shining down on a bronze woman who had clearly had some work done. A row of young weeping willows lined the road, their wispy branches swaying in the light breeze. A sign on the corner told him he was on Main Street. He could’ve guessed as much, given the courthouse. Quaint.”

Matt decides to stay a bit and find work. The only work he can find is helping to clean out an antique shop. It’s honest pay and even allows him to use his trusty ax to chop wood, his favorite pastime. His employer, Abbey, is a good person and things start to seem idyllic.

But there’s a serial killer operating in the county and Matt soon finds himself drawn in. Using his ability to see the evil in people, Matt  prevents tragedy. But Mr. Dark has something special planned for Matt.

An interesting variation to this episode has Matt finding a woman gifted with the same powers he possesses. She too can see people cursed by Mr. Dark; those who are on the verge of committing something terrible. And she also claims to have died and returned to life. But you’re never quite sure if all she’s telling is true.

As in the last episode, we are shown Matt’s amazing recuperative powers. He can quickly heal from injuries. This is a nice touch to the series as it avoids all the “How many times did the hero take a .45 bullet hit?” questions which were never answered in the old pulp novels. Philip Jose Farmer concluded in his study on Doc Savage that most of Doc’s aides would’ve had mush for brains after all the knock-out blows they endured.

Mr. Dark makes a brief appearance, of course. We’re also told that Matt was “chosen” for his divine task, but not by who or why.