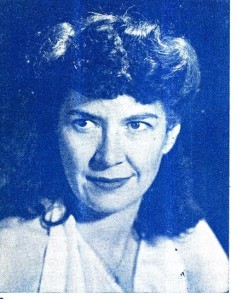 As my obsession with the mysterious Science Fiction writer Margaret St. Clair continues, I find myself forced to seek-out tangential material. Recently, I obtained a copy of Margaret St. Clair: Space Frontierswoman (1986) and a men’s‘ magazine, Dude, which contained one of her short stories. I’m sure more material exists and perhaps one day I will find that elusive photograph of her.
Margaret St. Clair: Space Frontierswoman (2nd revised edition) is volume 15 of Galactic Central, “Biographies for the Avid Reader”. It was put together by Gordon Benson, Jr. and describes itself as a “working biography”. Format-wise, it can be described as a chap book, is printed by photocopying, and appears to have been set in type with an early home computer graphic program. It’s a mere 10 pages in length, but does attempt a complete listing of all her short stories and novels. 113 stories are listed as having been published, as well as 11 books. There is also a third section listing the 8 “Oona and Jik” stories as having been published from 1947-49. I haven’t encountered these stories as of yet. It’s a concise little listing, but contains no new biographical information.
The Dude magazine was one of the many publications aimed at the swinging bachelor which appeared in the wake of Hugh Hefner’s success. It was published from 1956 to 1976 on a bi-monthly basis. Most of the articles dealt with the good life: European women, French stage shows, and booze. In September of 1959, Margaret St. Clair published a short story in it entitled “The Lost One”. It’s not mentioned in any anthology of her works.
I mention this short story because it has become my favorite one by her. “The Lost One” shows St. Clair at the top of her game and clearly demonstrates her ability as a writer. The plot is simple: a divorced lawyer goes to a bar to drink his troubles away and meets a mysterious, beautiful woman. She tells him how much he resembles her dead husband and they go home together. Weeks later, the lawyer feels a longing for the mysterious woman and returns to the same bar where he sees her with another man. To tell anymore would ruin the story, but I will say the ending hit me with a brick to the head.
Hopefully, I will find more material by and about her in the future.

Update: Through the wonders of the Net, I have finally found copies of Margaret St. Clair’s “Oona and Jick” stories. I’m currently reading them right now and will review the set in a later post. Also, I have found two pictures of her, one of which is published at the top of this article. 11/23/14