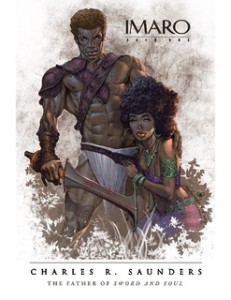 Imaro Book 1 is the e-book edtition of Charles Saunders “sword and soul” novel which was first published by DAW Books in 1981. The original DAW cover made comparisons to the Tarzan books which provoked a complaint by the Burroughs estate. Which was a poor choice of blurbs since the Imaro stories resemble the Conan adventures more than any other fictional work. The book is also an anthology of stories which Saunders published separately in the 1970’s. I should also mention this is the best cover yet for Imaro.

The stores take place in Nyumbani, a fantasy version of ancient Africa. There are differences, but Africa is obviously the basis for this world. The hero, Imaro, grows to manhood in a tribe called the Ilyassai, who herd cattle, but are quick to defend their traditional lands on the plains. Because Imaro’s mother left the tribe and returned pregnant with him, he’s called “The Son-Of-No-Father”,i.e. a bastard. Although Imaro grows to be a giant of a man, he’s looked at by scorn in his own tribe. But the tribe’s sorcerer sees something powerful in him and desires to eliminate the young warrior.

Who sired Imaro is left vague. It’s not really resolved at the end of the book. One thing the reader does learn is the fear he inspires in the various demonic creatures Imaro encounters. He stands in the way of their total control of his world. The demon lords of Nyumbani want Imaro dead and go to great lengths to make it happen.

In “Knives of the Turkhana”, Imaro is still a young man who has not proven himself to the tribe. He’s captured by an enemy tribe, the Turkhana, led by a sorcerer who demands human sacrifices. But his powers prove to be no match for Imaro, who nearly wipes out the enemy tribe. There’s a powerful animal transformation scene in this story.

“Place of the Stones” is the next story. Imaro, betrayed by a sorcerer in his own tribe, is accused of cowardice. But he manages to redeem himself by the end of the story. Imaro also discovers he’s the target of the demon lords of Nyumbani who want him dead. There’s also a chilling “living dead” sequence.

Imaro leaves the plains only to be captured by a roving group of bandits in “The Haramia”. But Imao ends up joining the band and eventually becomes its leader. He manages to save the rest of the band from destruction from a magic statue . He also finds the love of his life, Tanisha, in this story. Tanisha comes to the band as a captive, but decides to stay with Imaro after she falls in love with the big man.

The encounter with an animated totem is the best sequence in the entire anthology:

“The encampment resembled an overturned anthill. Haramia were running in all directions, some chasing panicked horses that were fleeing as well. But it was not the terrorized bandits that caused Imaro to suddenly stand immobile, mouth falling open, eyes wide, muscles as stiff as those of a beast at bay, staring at a sight nearly as grotesque as what lay beneath the robes of Chitendu…

It was the Afua. The statue had… grown. It had become as tall as a tree, and its golden spikes were now as lengthy as spears. Blood dripped from some of the spike-points – the ones closest to the ground. A hole the size of a man’s fist marked the place from which Rumanzila had pulled one of the spikes.”

The final story, “Betrayl in Blood” has Imao’s bandits on the run from two kingdoms. He decides to create his own kingdom with his warrior band, but two magicians have decided to kill him. They almost succeed. Much of this story  a battle between the two kingdoms trying to destroy the Imaro’s band of renegades. There’s even an attack by river demons right out of a Roger Corman movie.

The only real complaint I have about this book is the tendency to put African terms into italics even after the explaining the noun. There is a glossary of terms at the end of the book. But, the author assumes the readers have no familiarity with the terms he’s using. Thus you find such passages which slow down the narrative:

“Unconsciously, Imaro curled his fingers around the hilt of his simi, the short, iron sword sheathed at his side. He reluctantly uncurled his fingers and raised the tip of his arem skyward in a gesture of acknowledgement. Often were the times he wished Kanoko were not Ilyassi….”

But the author’s descriptive passages are bright:

“Ages ago, the misshapen pile of crumbling masonry was a building, an edifice of colossal proportions. The gigantic stone blocks from which it had been constructed once fit together with immaculate precision. But that time was thousands of rains ago, as humans measure time. Now, the structure was only a mound of aging stone, futilely defying the passage of the rains even as the name of its long-dead builders had long since been forgotten. It hulked in the midst of the Tamburure like a monument to a time so distant that even the land surrounding it had changed.”

These days, Mr. Saunders earns his living writing for a Canadian newspaper. He’s become an inspiration to an entire generation of sword and soul writers. He publishes new story collections every few years. Many of the new genre writers, such as Milton Davis and Derrick Ferguson list him as an influence. He has a blog which he updates on a regular basis.

Two more Imaro books were published in the 1980’s: The Quest for Cush (1984) and The Trail of Bohu (1985). I’m looking forward to e-book publication. A final note: the author eliminated one tale from the earlier version of this book because he felt it tied in too closely with the Rwanda Massacre. I can’t say much more as I lack a copy of the original DAW publication.