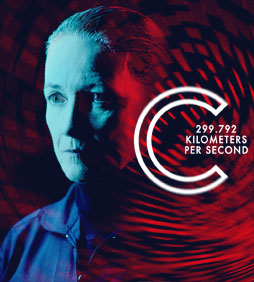 C, released in 2013, may not be the greatest science fiction movie of the past 25 years, but it comes awfully close. The only disappointment I have with this film is its length: 14:45 minutes. Produced and directed by the incredible team of Otto Stockmeir and Derek Van Gorder the movie, funded as part of a kickstarter campaign. Both of them were interviewed on Crossing the 180, a podcast devoted to independent film when the movie came out last year. One of their selling points was on the making of this film, without the use of green screens or CGI. Actual miniature models were built for the outer space sequences. And you can watch the entire movie on Vimeo for free!

In the future humanity, caught-up in an interplanetary war. Civilization is on the verge of destruction. Lt. Commander Malleck decides the time has come to escape the ceaseless war. She makes her move by staging a mutiny on the war ship KESTROS IV with the help of the engineering crew. Her plan is to hijack the resources of the massive ship and head to the stars. But she doesn’t count on resistance from a resourceful group of soldiers headed by the charismatic Lt. Kai. Gripping from start to finish this is the kind of movie Hollywood should be making. It anticipated Interstellar by at least a year.

The cast is largely unprofessional unknowns who give it their best. You don’t get the steroid enhanced Sgt. Rock types which infest warfare movies these days. For instance, the commander of the war ship resembles a high school principal. The woman who plays Lt. Commander Malleck maintains her intensity for the entire running time, but reminded me of one of my stern aunts. The actor playing Lt. Kai almost steals the show as the “can do” officer. But the acting is a small part of what makes C work.

For instance, how can you not love a science fiction film which begins with a 16mm film from 1981 featuring a prominent scientist lecturing on war, technology, and the need to expand to the stars? I listened to an inteveiw with the filmmakers. There was the problem of “exposition”. In other words, how to you tell the audience what has come before without boring everyone with endless scenes of poindexters talking about light speed, the past hundred years, blah, blah, blah. One of them had been the old Cosmos series with Carl Sagan from the early 80’s and had an epiphany. And it was brilliant.

The effects are breathtaking. There’s a reason whyGeorge Lucas and company set a standard with miniature model animation in the 70’s. The filmmakers used multiple ways of recording the images, including Super 8 cameras and 16mm. Most of the film was shot on video, but the cinematography is exquisite. OK, it may not be up to Pixar levels, but, dammit, the film works! This movie has more heart than the last three remakes of any big budget SF movie. It’s been a long time since I wanted to give a film a standing ovation and C definitely got it.

In some ways this film reminded me of Lifepod (1981). In the 80’s, Gold Key was distributing a lot of no-budget Science Fiction films to TV stations. Most didn’t have the budget they needed, but all had passion. Lifepod, about a group of survivors on a “lifepod” trying to outrun a sentient space ship, was the best of the lot. Even the analog synthesizer music use in C calls back to those days.

As the filmmakers themselves describe the creative process on their website:

“To build the future, we looked to the past. No CGI or greenscreen was used in the making of the film; all our sets and props were built by hand and filmed in-camera. Combining new advances in digital camera technology with traditional special effects, we sought to create a unique look through lighting design, camera tricks, miniature photography, split-screen, and stop-animation. We believe that this approach allowed us greater creative possibilities on a low-budget science-fiction film.”

So watch C. I promise you’ll be rewarded.