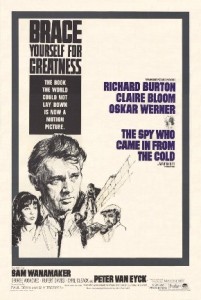 The Spy Who Came In From The Cold, starring Richard Burton, is the finest example of spy movie noir I can recommend. Based on the novel by Jon Le Carre, the world of international espionage is depicted not as a glamorous one where suave agents battle Dr. Evil, use neat gadgets and bed blond supermodels on the Rivera. Instead it’s a gritty, dirty world where underpaid civil servants do morally objectionable things just to save their retirement benefits. And it was shot on black and white film.

The movie opens with a cold day at Checkpoint Charlie, the crossing point at the old German divide. Alec Leamas (Richard Burton), of British intelligence, is waiting for one of his operatives to make the crossing. Tensions are high and when a college from the CIA asks the West German guard if they might be able to provide “covering fire” if needed, he’s informed such an action could provoke a war. Without any announcement Leamas’ man is seen crossing the border on a bicycle. He almost makes it, but is gunned-down at the last-minute by the East German guards. Humiliated, Leamas finds himself recalled to London.

In London, Leamas meets with his boss, who is only known as “Control”. Control tries to tut-tut the who incident and suggests there might be a nice desk waiting for Leamas. He also delivers dead pan lines about the morality of doing immoral things to make sure your moral side can win.  Since the former station chief refuses the desk job, Control decides to “keep him out in the cold”.

We next see Leamas shuffling around London trying to find a job. It’s not clear what he’s up to, but the viewer assumes it has something to do with his latest assignment. He eventually finds a job as librarian in a psychic research library. There is a funny scene where he tries to figure out where a book on werewolves should be filed. There, he meets the lovely Nan Perry (Clair Bloom). Perry is involved with a local branch of the British Communist Party, which Leamas finds endlessly amusing. She falls hopelessly in love with Leamas.

Eventually, Leamas gets in a fight with a corner grocery store owner over his lousy credit. he picks a fight with the grocer gives credit to an Italian couple, but not him. Naturally he’s sent to jail.

Leamas is soon released from jail. One day while killing time at a local park, Leamas encounters a man who claims to be working for a ex-convict support group and offers to help him if he can supply certain bits of information. Leamas unloads on how he feels about the whole secret service and the his treatment. Eventually, he meets with another man who offers to pay him a tidy sum to write some analytical papers in Holland. But once he arrives in Holland, his contact finds a reason to whisk him to East Germany.

At which point the plot becomes quite complex. The whole reason the East Germans wanted him was his knowledge of a mole inside the East German secret service. Pitted against two East German intelligence officers who hate each other for many reasons, Leamas finds himself in a vice. Each one wants Leamas to spill some useful information on the other and eliminate the rival. It all comes to a bitter end in a special secret tribunal the East German Government has convened to figure who is spying for whom.

Richard Burton received a lot of bad publicity over the 60’s for his actions on and off-screen. His rocky marriage to Liz Taylor didn’t help matters. And he starred in some of the biggest bombs (Cleopatra) to emerge from Hollywood. But in this movie Burton shows his the power of his acting ability. Lines spoken with force and he’s never off the mark. I’d go so far to say this is his best movie.

Claire Bloom shines as well. You don’t have the least bit of trouble believing she’s some innocent woman who has found her life’s meaning in a communist party. When she proclaims her role as local “secretary” for a party branch, it’s not with the least bit of humor. Sadly, it’s the innocent, true believers who pay the worst price.

The cinematography is crisp and the sound recording excellent. Cold war Britain and East Germany emerges as depressing places. This is about as far from Austin Powers country as you can get. As for the whole spy profession, Burton describes himself at one point in the film:

“I’m a man, you fool. Don’t you understand? A plain, simple, muddled, fat-headed human being. We have them in the West, you know.”

The spy vs. spy contest in the last half of the film is defining. When Leamas asks the first interrogator, named Mundt about meeting with the second, and rival, interrogator, Fiedler, he’s told Fiedler is “good enough for a Jew.” There are endless scenes of Mundt and Fiedler facing off against each other, trying to prove the other is working for the enemy. You can’t walk out on any portion of the tribunal scene without missing something important.

I’m not surprised this movie isn’t remembered anywhere as much as the Bond movies. The world of espionage in it lacks any kind of glamor. The spies do what they do just to keep their lucrative jobs and not for reasons of ideology. But the best summation is delivered by Burton:

“What the hell do you think spies are? Moral philosophers measuring everything they do against the word of God or Karl Marx? They’re not! They’re just a bunch of seedy, squalid bastards like me: little men, drunkards, queers, hen-pecked husbands, civil servants playing cowboys and Indians to brighten their rotten little lives. Do you think they sit like monks in a cell, balancing right against wrong?”