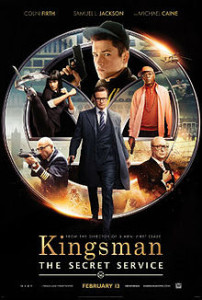 Kingsman The Secret Service opened this weekend competing with a few other movies. I managed to catch an afternoon show at the Regal googolplex cinema in Oaks, PA. The crowd was decent for an afternoon show and was respectful. I didn’t notice any cell phone lights or loud talking through movie. And the theater was packed for all the other movies as well. Guess The Sponge Bob movie was pulling them  in on a snowy Pennsylvania day. But there’s nothing like watching a mindless spy movie while sharing a garbage can size of popcorn. And we found a good seat on the ground level without any trouble. Finally, we only had to endure 4 coming attractions, all of which figured into the theme of the movie we were going to see. All-in-all, a pleasant viewing experience and I want to give kudos for the Regal management (contrasting it with the ungawdly experience I had trying to get the wife and 3 kids into a Titanic showing years ago at the now-closed Coventry Cinema which resulted in me having a heated conversation with the manager). 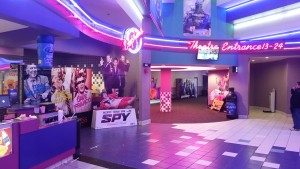 On with the show.

Kingsman The Secret Service is based on a comic book, The Secret Service by Dave Gibbons and Mark Millar. I can’t say how the movie compares to the comic, because I haven’t read it. I’m told the story differs substantially. It’s a fun return to the 60’s spy movies where the emphasis was on style, gadgets and cars. It’s also a very British movie, which will confuse the American audiences. I had to remember what “Taking the piss” meant in Thames Estuary English. It’s still a lot of fun and I can’t recommend it enough. Could’ve done with out the abundant CGI effects.

The prologue has several spies hanging in from a helicopter as they wing into the compound of a middle eastern warlord. One of them is killed in the mission and it’s up to agent Galahad (Colin Frith) to deliver the terrible news to his fallen comrade’s wife and young child. He gives the widow a medallion. It has the letter “K” on it and he tells her to call them if they ever needs anything. When the widow refuses the medallion, he hands to the toddler,reminding him to take good care of his mother.

Forward to the present. The toddler has grown up to be Gary “Eggsy” Unwin (Taron Egerton) a talented young man with not much of a future. His mom has taken up with a thug and has another child. After getting tossed in a cell for stealing a car from a local tough, Eggsy remembers the medallion he wears, calls the number on the back and asks for help. Suddenly he’s a free man and walks out to meet Agent Galahad, AKA Harry, the same man who brought the horrible news to him and his mother about his father’s death. Harry is from the John Steed school of British secret agents and looks dapper in a suit with an umbrella. He tells Eggsy about the secret service organization his father and him belonged to. When some of the local hooligans show up looking for revenge over the car theft, Harry takes them all out with combined martial arts and his gadget-enhanced umbrella.

At the same time, we are introduced to the criminal mastermind every good spy movie needs. In this instance its Richmond Valentine (Samuel L Jackson), an internet billionaire who dresses flamboyantly and speaks with a lisp. He’s decided his private efforts to stop ecological disaster have been a waste of time. Now he’s come up with a new plan: eliminate the source of the problem, i.e., most of the world’s human population. But Harry’s private secret service organization, the Kingsman, has Valentine in their sites. Will they be able to stop him before he realizes his sinister plan?

Much of Kingsman The Secret Service concerns Eggsy’s training. At the beginning of the film, one of the Kingsman operatives is taken out by  a henchwoman of Valentine. Since there are only 12 active field operatives at any given time, each of the other agents nominate a successor. Of course, Harry nominates Eggsy and he moves into the training compound with the other candidates. The training is rigorous and the trainees are informed by the their instructor, and Kingsman tech specialist, “Merlin”, some of them may not survive. There’s unexpected encounters with weapons, potential drowning and a particularly scary scene with a high altitude sky dive. Naturally, most of the other candidates are Cambridge and Oxford snobs, making fun of Eggsy’s working class accent.

The actual Kingsman organization is something of a mystery. In the comic the agents simply worked for a branch of the British government. Like Mr. Bond, it was a “ministry” always seems to be some shadowy government branch overseen by men in bowler hats. But the organization in Kingsman The Secret Service is an independent organization. Harry takes Eggsy to their headquarters early in the film and it turns out to be a high-end tailor shop, “The Kingsman”, which has been making uniforms and suits for the British government for centuries. As Harry describes it, the firm was wealthy, but lacked heirs. Concerned if they did nothing, there might not be a British government to clothe, the company decided to put its vast money into toward a secret society designed to serve Britain and humanity. Although, like UNCLE HQ, the outside of the shop may look ordinary, it’s the doorway into a vast organization with its own weapons, finances, and technology. Running the show is agent “Arthur”, played by the venerable Michael Caine.

Another topic Harry occasionally talks about is how gentleman are born, not made. The smart suit worn by a Kingsman is his suit of armor. It’s also bullet proof. “Manners maketh the man”, Harry proclaims just before he locks the door behind him to deal with some punks. Even when meeting in virtual, the 12 Kingsman agents sit at a table, not round, but rectangular. It’s an amusing application of Thomas Malory to the modern world.

Looks like 2015 is the year of the spy movie. Kingsman The Secret Service shows it’s off to a good start.