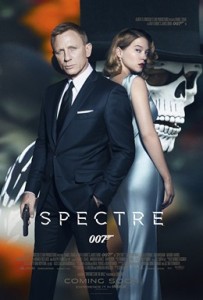 One of the many SPECTRE posters.

Spectre, the latest James Bond movie rolled into town this month, just in time for the holidays. I caught it yesterday afternoon at the local movie tavern, a nice place to watch a digital projection in comfortable seats were servers will bring you a menu and take your order once you push a button. The lights are kept on during the coming attractions and for the introduction so you can see the menu. I had a bag of popcorn and a bottle of water. Total cost: in excess of ten dollars.The afternoon movie ran me $9.50. You pay for all the amenities. At least I was able to park right out in  front of the theater. The audience consisted of ten people including me. I sat right next to a mother and daughter who swooned every time Bond made an appearance. 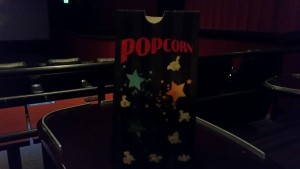 This was a long Bond: the movie clocks in at two and a half hours. Which is a half hour too long. Why the producers didn’t chop it out of this movie something I don’t understand. Bond movies are fun spy thrillers, but they’re not Lord of the Rings epics. You know when you buy your ticket Bond James Bond will A) shoot the bad guys B) get the beautiful girl and C) save the British Empire. Although not always in that order. You expect and should get top-notch explosions and special effects. And gadgets, plenty of expensive gadgets with designer names on them. Last of all, there must be an Evil Overlord who wishes to destroy all that is good about Western Civilization. And the gun shot at the beginning with the camera iris. Oh, yes, very cool credits. Always very cool and sexy opening credits.

The movie starts off on the right foot. Bond is in Mexico City for the Day of the Dead celebrations when he ditches the hot woman in his room to walk along the outside of the hotel for a little side mission. While a massive party takes place down in the streets, Bond listens to the assassin Sciarra in a hotel room plan a bombing of a stadium. He shoots it out from the across the parapets with a high-tech gun, but one of his bullets detonates the explosives the assassin had on him. This causes the entire building to collapse, but Bond and the assassin survive the destruction. Bond catches up with the bad guy as he tries to escape in a helicopter and fights it out with him high above the festivities while the crowd cheers from below. He triumphs, as always, and takes as his trophy as gold ring with an octopus symbol on it.

Next, we learn Bond was on vacation when he went after the bad guy. He acted on his own. The new “M”, played by Ralph Fiennes, is pissed at Bond because the super secret service double Oh program is up for review. After the destruction of the MI6 building in the last episode, Her Majesty’s government is reorganizing everything into a new program. Bond and M have a new boss, a young, connected career public servant, whom Bond dubs “C”. We learn why Bond temporarily went rogue and took out the assassin in Mexico City: he received a video after the last “M” met her end: she instructed him as a last request to kill the assassin Sciarra.

It turns into a hunt for the sinister organisation Spectre who seeks to dominate the world by any means necessary. Bond infiltrates the annual stockholder meeting of Spectre in Italy and spots the shadowy figure who runs the holding company. At the same time an international security network is about to go live after the honest South Africans have folded and no longer block its formation. Is Spectre behind it and the bombings which force its creation? Who really does “C” answer to and what are his real motives? And What about Beryl, the girl next door?

Daniel Craig is the best Bond in recent decades. I’m partial to Roger Moore because he was the seventies Bond and the Bond you love will always be the one you remember. The latest Bond knows how to make a suit and tie look sharp, he even wears a gold collar pin. How’s that for style? I was ready to sketch out his bow tie in one scene it looked so good. He is a physical Bond who can dangle from a helicopter out of control with the best of them.

As for the Bond girl, she’s okay. I expect a lot of Bond girls and they focus on one in this movie. Monica Bellucci has brief role as the wife of a dead assassin, but she lit up the screen in the few moments on it. The new Bond girl, Lea Seydoux suffers from a lack of English-speaking ability, which makes her hard to understand. You’d think with all the women out there who want to be a Bond girl they could find some real talent. The same lady, Naomie Harris,  plays Moneypenny, from the last movie and I wish they’d have given her more screen time.

The rest of the crew carries over from the other movies. We have the same “Q”, a product of Cool Britannia, but I’m partial to the elder scientists in the other movies. Bond gets behind the wheel of a neat Bond Car and spends the bulk of a car chase scene trying to figure out how to operate it.

The bad guys are straight out of the franchise. The principal villain, Dave Bautista doesn’t hesitate to kill people with his bare hands. The CEO of Spectre is revealed to be another famous Bond villain, although a younger version. He even has the white cat. They’re not too bright, another Bondiverse characteristic. You would think by now the bad guys wouldn’t fall for the old explosive watch trick.

Spectre is a fun Bond movie, but a tad bit too long. I recommend it for the hardcore spy movie fan and Bond devotees.

To purchase on the Blu-Ray, click on the link below: