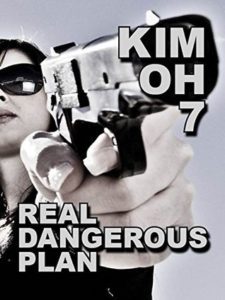 Kim Oh #7; Real Dangerous Plan continues the Kim Oh series in excellent form. In this episode, Kim Oh, the tiny twentysomething Korean American gun woman, is stuck in the hellhole of the American Southwest. One thing I have to admit about Jeter, no one does a better job of portraying the depressive state of being lost in America.

Kim is forced to hide out in a remote trailer court because she’s been the victim of an assassination attempt. A gunman tried to kill her, but she survived with the help of her college Elton, who finds the hidden trailer court for her to conceal herself while he straightens things out in the big city. Kim is stuck with a cast on her right arm, which happens to be attached to her the hand she shoots with. Her handicapped brother Danny is with her and all they need to do is wait it out until Elton resolves the issue on the left coast. Of course, would we have a novel if that happens?

The wretched existence of the denizens of the trailer court is portrayed by Kim’s observations:

“…There were some people out here in our little ramshackle community of wheelless trailers and immobile mobile homes and tents of flapping, faded canvas, that I’d started calling the creepers. They’d been out here excessively long. Maybe the sun had gotten to them, baked their brains inside their skulls, or just living – or existing – out here in the literal middle of nowhere had finally shut down whatever had been the last remaining human parts of them. They just stayed in their trailers all day and night, like animals that live in holes in the ground, maybe scurrying out once a week or so to take care of necessities like emptying out their chemical toilets or filling up whatever they used for their water stash, then slamming the battered aluminum doors as they scuttled back inside their perpetually darkened boxes.

…The biggest is the one everybody calls Slab City, about a hundred and fifty miles or so northeast of San Diego. That place has a couple thousand folks on it, at least during the cooler parts of the year. Snowbirds, footloose retirees, RV types, slightly deranged anarchists, and graying hippies who are so stoned, they’re still wondering when the next Dead tour is going to happen. Plus the chronically unemployed and the completely down-and-out – a lot more of them these days than before. The big flat stretch of concrete is all that’s left of some Marine Corps base that’d been built out there in the forties, then dismantled some time later.”

Most of the people at the court are dirt poor and elderly, whom survive on the little money they get from social security. It’s a terrible thing to complicate, and I speak as one who gets closer to the big six-oh every day. The author passed it a some time ago and chooses to live out his days with his wife in South America. In the novel, all these people want is to be left alone. A failed CEO, Adams, is the honorary mayor of the little collection of hamlets and tries to keep it in operation. Once a week, a handy man shows with a water truck and refills the cistern.

But things are about to get very bad. The local builder, Ortiz, decides he wants the inhabitants off the property for his own purposes. He has the usual collection of nightriders try to run them away, but they don’t count on a shotgun-wielding grandma with bad sight. Even the local sheriff would rather have the trailer court people leave and doesn’t want to be bothered by them.

Soon Kim discovers there’s much more to this old trailer court than is obvious. It turns out to have been an abandoned military installation and the trailers are resting on the concrete pads of the former huts. Her brother Danny discovers an entrance beneath their rental trailer to some kind of underground bunker. Worst of all, the self-appointed leader of the trailer court appears to have a deal in the works with the Ortiz, the builder who wants them off the land. Finally, there is a sinister Russian gangster named Duma who has plans of his own.

To reveal more of the plot would give it away. I don’t want to do that, so I’ll say no more.

As usual, Jeter unloads his worst characters from the business class. Adams is a complete snake who thinks his former status gives him the right to boss everyone else around the trailer court. He longs for the days of the country club and sales luncheons. Everything ties into his worldview, which must fit into an “action plan”. If you have spent any time in the corporate world, you realize the author didn’t have to do much to make him up.

There is not a lot of the idle speculation from the earlier books. Kim is a seasoned gunslinger by now and it’s beginning to show. Her cynicism is manifest and I assume it will only get worse as the series continues.

However, I do want to point out this book has plenty of action. Even the conclusion approaches an apocalypse. As a thriller novel, it delivers. And can you ask for more from a Kim Oh novel?

To order the book through Amazon, click on the link below: