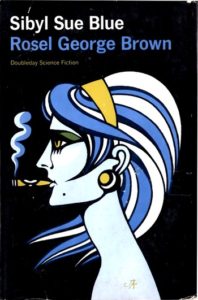 Sibyl Sue Blue by Rosel George Brown is one of those books which defined the sixties. The latter half of the decade was famous for all manner of innovative science fiction and gave rise to the “new wave” of the genre. Rockets became fertility symbols and cigars spaceships. There were plenty of the old guard still banging away at the typewriters, but even Philip K Dick was working on overload to find out how Do Androids Dream of Electric Sheep.

One of the many promising writers to come out of the huddle was Rosel George Brown. Married to a history professor at Tulane University, Brown wrote a number of science fiction short stories in the 1950’s and 60’s. She received a degree in Greek and worked as a teacher. Unfortunately, she died in 1967 of a lymphoma. I should also mention she collaborated with Keith Laumer on his epic space opera, Earthblood.

Sibyl Sue Blue is a tough future police detective on planet Earth in the distant future of 1990. She’s assigned to finding out who’s smuggling in drugs to the alien Centaurian immigrants. She smokes cigars, can deliver a mean punch and has a teenage daughter who is driving her crazy. She’s all-woman, but her husband disappeared on a trip to an alien planet years ago. If you could put this in a category, I would call it galactic noir. Sibyl travels down the mean streets of Earth in the future and is forced to make some tough decisions. It’s not written in first person, so we don’t get her observations on the weather or life in the big city.

During the course of her investigation, Sybil smokes an illegal benzale cigarette and suddenly has a vision of her missing husband. Something is inside the insidious cigarette that affects her mind. She’s able to return to normal, but knows there is something strange in the benzale drug brought back to Earth by the Centaurians. Meanwhile, she’s courted by the mysterious millionaire Stuart Grant who wants to mount an expedition to the planet Radix where Sybil’s husband disappeared. Toss in a mad scientist and the book starts to move.

One of the fun parts about reading a novel by this writer is the emphasis of what she finds as motivation. Sybil is constantly worried her make-up isn’t good enough and whether or not her clothes are appropriate for the job she performs. She’s groped repeatedly through the novel and has to use her martial arts training to put the assailants in their places.

Technology wise, the book is very dated. The space ships all leave from Earth and resemble big rocket cylinders. People use standard phones and no one has a personal computer in the future. No mention of video-on-demand. The future resembles the year Sybil was published; funny how that always works out.

This is still a fine book by a talented writer who died too young. I know there is a sequel, published several years after her death, and I’m looking for it.