The sequel to Wolf Mountain is now available: 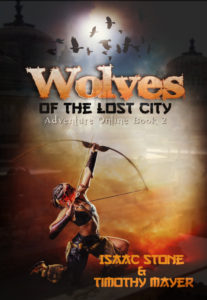 Seconds later the guns from the commando position opened up and bullets raked across the stone buildings around me. I felt myself scattered with stone chips and dust. I watched as the tent was torn apart by the combined arms fire from the Germans. I crawled in the direction of a temple, which would give me protection if I could get inside it.

I decided to try the submachine gun and see if it gave us any protection.  I brought it up in the direction of the forms that moved slowly across the bare perimeter. They didn’t seem to know where I was at the moment, but they were about to find out.

The magazine, cumbersome as it was, slapped into the side of the gun. I held the wooden stock with both hands. I took aim down the barrel and lined it up with the forms that moved in my direction. I counted twelve of them. I didn’t think I could get them all, but I had to try.

I squeezed the trigger and fired a burst in their direction. The smell of the gunpowder nearly choked me as I forget how close I was to the barrel. I let up from the trigger and looked in the distance. There were two less Germans and the rest were in retreat back to the forest. They didn’t expect any return fire once they reached the perimeter. To cross it could spell death. I fired off a few more bursts, but couldn’t get any more at this range. Damn, what was the rating of this gun and how many points did I have for accuracy? I needed to check that logbook again.

The heat of the barrel added to that of the blazing sun. The sun rose over the trees and dried the moisture from last night. I could still see the tracks in the perimeter where the commandos left their boot marks. They hadn’t expected the submachine gun, but now they were aware I had one. At least they didn’t know about the second submachine gun Tommy had with him.

“Over here, sir!” I heard Grom whispered and turned around to see him at the edge of the temple entrance. The fine stone carvings were pitted from the gunfire directed at us by the commandos.

I scooted back in his direction with both guns. At least I save them for our use. I knew Grom could keep the commandos at bay with his rifle, but they still outnumbered us. Should the Germans try a full assault, we wouldn’t stand a chance of survival.

I felt two hands on my legs and the sergeant pulled me inside the temple.

Once on my feet I saw, he and Tommy stand there with their weapons. They had the entrance covered, but there was only one way into this temple. We would be trapped if the commandos made it across the perimeter. It was urgent that we get out of the place, but they had a clear shot from their side of the forest.