The Assyrian by Nicholas Guild (Scribner, 1987) 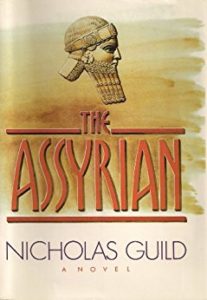 The Assyrian, by Nicholas Guild, is one of the few historical novels that look at the Ancient Near East (ANE). The book is a massive epic that covers the life of Tiglath Ashur, the son of the Assyrian King Sennacherib, who ruled much of the ANE nearly 4000 years ago. This is a monumental epic that would make a good epic film. In some ways, it reminded me of The Egyptian by Finnish writer Mika Waltari.

The book is told from the point of view of Tiglath Ashur, one of King Sennacherib’s many sons. The novel starts from Tiglath’s viewpoint as an old man reflecting on his life. He’s born from a concubine sent to the King of Assyria as tribute by a Greek prince. Tiglath comes of age in the House of Women, where all of the king’s concubines are kept. He is close with another boy, Easharaddon, son of a different woman. Because the king only wants so many of his boys in line for the throne, he has many of them castrated and raised as scholars. Tiglath almost goes under the knife until he impresses the his father with his courage.

A good chunk of the novel covers Tiglath’s years as he becomes a cunning warrior. We follow him as he rises in the ranks of the Assyrian army. Along the way, Tiglath picks up a Greek slave known as Kephalos, a physician, that provides comedy relief for much of the book. Tiglath also falls in love with a woman intended for his half brother Easharaddon. There are conflicts with his half sister’s political maneuvers. He becomes the favored son of the king, but chooses to lead armies into enemy territory rather than to stay home and play politics. This decision leads to the book’s climax, where Tiglath leads several combined armies deep into Mede Kingdom territory to confront the one man he fears.

The Assyrian soars when it focuses on the tactics of battle:

We had reached a terrible standoff, in which both armies could only butcher one another, each man hoping to inflict the deadly blow before it fell on his own shoulders.  For the most part, the battle squares of my foot soldiers still held, but the Medes in their vast numbers and their astonishing, reckless courage, were pressing down hard upon them.  The cavalry on both sides had abandoned even the pretense of a cohesive strategy, and their horses weaved in and out of the mobs of soldiers to strike at what targets they could find.

I received Kephalos’ letters from Nineveh, in which, because they were written in a language not many in the lands between the rivers could read, he felt emboldened to speak of the dissatisfaction at home.  There was division over the king’s war against Babylon; many felt with Esarhaddon that the city should be respected.  Their reasons were various:  fear of Marduk’s revenge, a sentimental attachment to Babylon as the mother of our culture and learning.  Some even said that Sennarcherib’s wits had been turned by grief over his son’s death, that he wasted blood and treasure in a blind, senseless rage.  It was a dangerous sign that such things could be spoken of Ashur’s king.  Kephalos, who was not a fool, wrote his letters on sheets of leather which I found neatly folded at the bottom of the boxes of medicines and supplies he sent me.  These I always burned.

The novel bogs down a bit when it concentrates on the Prince Tiglath’s love affairs and the pointless usage of Assyrian terms in italics where modern equivalents would do just fine. Look, I get it that his half brother, Esarhaddon, is crown prince and Tiglath is merely another prince. No need to smack me in the head with the Assyrian term for it over and over.

The author doesn’t shy away from the cruelty of the Assyrian Empire. The Assyrians where the Evil Empire of this time in history. The Assyrians only got to where they where because they were tougher than the competition. There is a famous wall carving of the Assyrian King Ashurbanipal reclining on his couch. In the background, the head of one of his challengers dangles from a tree. As someone once said about The James Gang: rough men used to rough ways.

Even the narrator is not the usual enlightened leader you might expect. He doesn’t hesitate to have the elders of an enemy tribe beheaded in front of the surviving clan and their daughters sold into slavery. However, for a real taste of how cruel he can be, here is the passage where he gets rid of a slave mistress who tried to poison him:

We went back to the baggage train, and I found Zabibe’s wagon, where she was lying on a carpet naked as dawn, painting her toenails.  She smiled when she saw me, but before she could speak I took her by the wrist and pulled her down into the dust.  The Metalsmiths one eye burned with delight when he beheld her, as well it might, for I would venture his village did not hold another that was her equal.

“No, Lord—NO!”  Zabibe tried to pull free from my grasp, but

And he gives her future husband a whip as the wedding present.

The descriptions of the public executions are gruesome. Traitorous rulers left to die in a public cage, families of princes who went against Sennacharib slaughtered as part of public ceremonies; these are not passages to read on a full stomach. There are times the book seems to wander into John Norman’s Gor territory. And all of it based on historical evidence.

At the same time, Tiglath finds a husband for one of his slave women and makes sure she has a large dowry. He even tells his troops not to kill the women and children because “we are not barbarians”. In essence, he’s a complex character, which is always the sign of a good book.

I recommend this novel if you want a historical novel about a part of history that doesn’t get enough attention. There is plenty of action, even if the main character spends too much time brooding about the one woman he will never be able to marry. I know there is a sequel and I plan to read it as well.