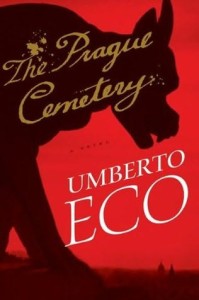 I’ve been a fan of Italian writer Umberto Eco every since reading his monumental Name of the Rose back in 1984. He is one of the best writers of thriller novels alive. Few people can match him for working obscure historical data into complex novels like. Foucault’s Pendulum was a long work where a group of bored book editors attempted to create a unified filed theory of occult lore, only to find it coming true. Baulodino was another of his medieval novels which looked at the backstage to a major historical event. Prague Cemetery takes the reader into the world of 19th conspiracies: The Carbonari, French secret service, Russian nihilists, etc.

The central premise of this novel: What if one of the most unspeakable crimes of the 20th century was initiated by a slimy sociopath trying to turn a fast buck? The protagonist in Cemetery is professional forger, a government informer to whoever will pay him, a double agent, and an absolute scumbag who doesn’t hesitate to kill anyone who turns against him. He’s also descended from an aristocratic northern Italian family and was raised with a pathological hatred of Jewish people. Welcome to the author of The Proctols of The Elders of Zion, an antisemitic tract which was required reading by the nazis.

The book begins with an introduction by “The Narrator” who is reading a diary kept by the main character in the novel. In fact, the novel has three viewpoints: the anonymous narrator who sees all; Capt Simonini who carries out most of the nefarious deeds; and a priest: Abe Dalla Piccola, who leaves comments and corrections in Simonini’s diary. Are these three people one and the same? You’re never quite sure until the close of the book.

After his grandfather dies, Simonini goes to work for a professional notary, who turns out to be a very good forger. As his employer, Rebaudengo, explains: “What I produce are not forgeries but new copies of genuine documents that have been lost, or, by simple oversight, have never been produced, and that could and should have been produced.” Simonini learns his art well; so well that he’s of great use to one of many official governments on the Italian peninsula.

It occurs to Simonini one day that people have an innate need to blame others for their misfortunes. Using this epiphany, he’s able to create all kinds of documents which blame any given social turmoil on secret conspiracies. With all kind of clandestine brotherhoods running around europe in the 19th century, he has no problem doing this. He merely had to expand on a scene in a Dumas novel, marry it to something in a book by another dramatic write and instant conspiracy! His employers always want to believe the worst, so they seldom check on his sources.

It pays to have a good knowledge of european history to read this book. Cemetery had me constantly turning to the Net for information on The Risorgimento, Garibaldi and Eugene Sue. The translator has a bothersome tendency to leave some terms untranslated; as if there are no english equivalents. He leaves the french term “suiveurs” alone to describe older men who tag after younger women, whereas the modern term “creeper” would’ve sufficed.

Always Simonini keeps his phobia of Jewish people close to heart. He meets Sigmund Freud at one point and gives a totally disgusting account of the founder of psycho-analysis. But what Freud tells him has a bearing on the entire book.

A good portion of the novel deals with the french prankster Leo Taxil, who convinced the population of Marseille sharks were infesting the harbor and had mobs of people traveling to see the sunken Roman city at the bottom of Lake Geneva. Simonini is the catalyst who sends Taxil into the arms of the Roman catholic church where he begins publishing a series of attacks on the Freemasons. His sources are a schizoid woman and whatever he can dream up. But the church hierarchy wants to believe it all and showers Taxil with praise and money. Simonini, of course, receives his percentage. Eventually Taxil reveals everything to be a farce, but Simonini is already moving on the next target: a document which will “prove” everything he fears about the jews.

It’s good to remember the only contrived characters in this book is Simonini and a few minor players. Everyone else is an actual historical figure from the 19th century. When Eco quotes from a newspaper by the french jew-hater Edduard Drumont, he’s not making it up. The book is also illustrated by actual 19th century drawings. When the professional demagogue Osman Bey makes a reference to a “final solution” to the jewish problem, your blood chills. Even then….

Finally, the Russian secret service contacts Simonini to provide them with a document which they can use to keep the jews in place. This proves to be his Magnum Opus Diaboli: The Proctols of the Elders of Zion. Enlarged from various 19th century conspiracy novels, it tells of a hundred year meeting between the rabbis from all over the world, hatching their master plan for world dominance. Simonini manges to season it with something for everyone, ensuring the document will appear to everyone’s twisted fear.