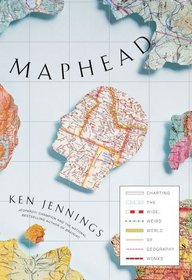 I myself was a maphead once upon a time. I’ve always loved maps and charts of exotic places. My parents subscribed to National Geographic magazine and I thrilled at all the maps it provided. The vast jungles and seas of the world were delivered to my mailbox every month. As I grew older, I found stores which specialized in maps. At one point I had an entire room decorated with maps (“Looks like a terrorist hide-out,” one friend grumbled). I’m glad you can find this on kindle books.

One of the author’s trips takes him to Geography and Map Division of the US Library of Congress. It’s truly and awe-inspiring place. For instance, it has one of the few known copies of Ino Tadataka’s 1821 map of Tokoyo. It also has a copy of the 1507 world map by Martin Waldseemüller. This is an astoundingly accurate map which shows North America separate from Europe or Africa.

My favorite chapter is called “Legend”. In this entry, Jennings looks at the history of imagined places. He begins with Austin Tappan Wright’s Islandia, a book about a diplomatic mission to an imaginary country. Wright created the entire civilization, down to maps and history, for his own amusement. The books wasn’t published until 1942, years after he’d died. It was an immediate sensation. He also talks about Treasure Island, J. R. R. Tolkien, and William Faulkner. Many of us dream of a better place, or at least someplace else.

Chapter 10, “Overedge”, is the one most read. Jennings begins with this pronouncement: “At midnight on May 1, 2001, some unnamed hero at U.S. Air Force Space Command, located on the high plains just east of Colorado Springs, pressed a button, and it affected millions of people all over the world.” Of course he’s referring to the event which made civilian GPS units correct to a few meters. Which also made the pursuit of geocaching possible. He interviews Dave Ulmer, who placed the first geocache soon afterwards. Jennings does a little geocaching himself and understands the appeal. He even talks with some of the most extreme geocachers, such as Bryan Fix who, when the book was written, held the record for FTF’s. And there’s the mysterious Lynn Black, a Pennsylvania native who held a world’s record and mysterious walked away from geocaching in 2009.

This is an excellent book which should be read by anyone interested in maps and cartography.
[amazon asin=B004IK98BK&text=www.amazon.com]