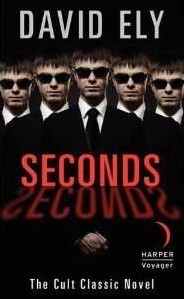 Seconds, by David Ely, was first published in 1963. In 1966 it was made into a movie starring Rock Hudson. I viewed the movie version and read the book in the space of a week. I must say the movie is a very faithful adaptation of the book. The movie is considered part of director John Frankenheimer’s “paranoia” trilogy, the other two being Seven Days in May and The Manchurian Candidate.

The book opens from the point-of-view of the protagonist. We never find out his real name, but he’s attempting to contact the anonymous “company” about faking his death and being “reborn” in a new identity. We do know that he is a 50something banking executive and went to prep schools. After being shuttled from one safe house to another, he’s finally introduced to Mr. Joliffe, who outlines the company’s policies, what kind of death they are going to fake, how much it will cost, and where he will be sent. The protagonist, who adopts the name “Wilson”, is at first apprehensive, but then is shown another bit of forgery: a film of him assaulting a woman in a cheap hotel. After he’s introduced to the owner of the company, “Wilson” has no choice but to sign his future life to them.

What follows is an extensive round of surgery to completely redesign his face and body, although Wilson looks in a mirror and notes his eyes remain the same. Next, the company puts him through drug-induced hypnosis and finds out what he’s always wanted to do: paint landscapes. After having his new life explained to him, Wilson is shown a series of counterfeit documents for it and flown to a seaside house on the California coast, which will be his new home.

But deep down inside, Wilson remains the man he always was. All the physical and career conditioning the company can do will never change his inner self. The butler he’s provided with, Jonathan, does everything possible, even bringing him a young figure model who wants to satisfy his every need. It all comes crashing down when Wilson agrees to sponsor a cocktail party and meet his neighbors. Drunk, he begins to talk of his former life, how he misses his wife and daughter. However, it turns out his neighbors are also “reborns” and don’t appreciate his blabbering. But nothing can change him. Not even repeated calls from “Charley”, a friend from a former life who recruited him for the company.

Finally, Wilson commits the ultimate sin: he flies to Denver and New York to meet with his real daughter and wife. They don’t recognize him of course, but he introduces himself as an old friend of the husband/father and tries to find out what they really thought. Of course, they didn’t think a lot of him, he was too busy trying to earn a living in his Mad Men world. When he leaves his wife’s house, there’s a car waiting for him from the company. It doesn’t end well.

As close as the movie was to the book, there are some differences. The whole naked grape stomp scene doesn’t exist in the book. The woman he meets on the beach at the beginning of his new life doesn’t do much in the novel. But there’s enough similarities to enable you to read the book as  you watch the movie. I can’t read the words of the old man who runs the company without hearing Will Geer. Although the company representative he first encounters has a different name than the same character in the film, all I could hear while reading this section was Jeff Cory saying “corpse” in that strange speech pattern of his.

The chaplain’s speech at the conclusion of the novel is almost identical to the one in the movie:

“You were perhaps reared in the Protestant faith?”
“Yes.”
“And you were never converted to any other?”
“Well, no.”
“Good. That is,” Dr. Morris amended with a smile, “I mean ‘good’ in the sense that we have a certain definition. I don’t mean to suggest that being a Protestant is any better than being a Catholic or a Jew, and as a matter of fact, I would be qualified, if I may say so, to serve you in either of those faiths as well.”
Wilson gazed at him uncertainly.

The novel is just as powerful today, almost fifty years later. And I think it resonates with men in their later years who can look back and wonder what happened to all their dreams. If someone could reboot your life for you, would you let them?

The old man has the best comment at the end of the book:

“…Oh, except that the failures kept on coming, more and more, and I finally had to admit that I might possibly have based my enterprise on a fallacy. I’ve always tried to be honest with myself, son. That’s the only way to live honorably.” He waved his pipe, which promptly went out, and he was forced to light it again. “As for that fallacy, it was simply this: that my business seemed to attract the wrong kind of clients. In fact, I often wondered whether it didn’t attract only the wrong kind of clients.”

David Ely is one of the great unknown/underrated writers.